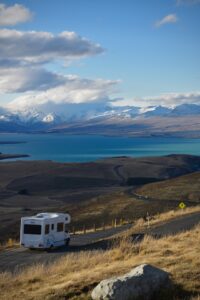 For Deedee,* 2018 began with excitement and anticipation, as her husband neared his retirement on May 1st of that year. They had big plans to jump in their RV and “hit the road” that summer to celebrate, so Deedee thought she would schedule her annual mammogram prior to the trip. One call to her clinic – and a same day appointment later – she was diagnosed with an aggressive form of triple negative breast cancer. On May 1st her husband retired, and on May 15th, she began chemotherapy, their dreams of relaxation, sightseeing, and adventure put on hold.

When Deedee told family and friends about her diagnosis, “I got the feeling they thought that somehow I was careless in my preventative care. One of my friend asked, ‘How could you not feel the lump?’ and I told her, ‘Hey, it was a normal mammogram. Nobody could feel it!’ I had more hands on my boobs than I could count and not a single one of them could feel the lump!” Deedee exclaims with emphasis. “The undertone was that somehow I missed it.”

Even more rattling was her sister’s reaction to the news of her breast cancer. “My sister said, ‘Well, my doctor says I’m really healthy.’ Like I wasn’t?” Deedee thought to herself. Her sister even had the nerve to offer her nutrition advice – which Deedee took offense to, as she was a registered dietician! “She told me that I shouldn’t eat anything with processed sugar or red meat.”

Deedee had had enough and pushed back at the friends and family who said things like this to her. “I told them, ‘Hey, you can say these things, but I was in your shoes not long ago. I wasn’t thinking I was going to get breast cancer either.’.”

However, Deedee couldn’t quite quell the feeling that perhaps she had done something to cause her breast cancer. Her own guilt got the better of her and she asked her doctor what caused her breast cancer during her next visit. Her doctor told her that it was nothing she had done, but something that just happened. “I asked my doctor if there were foods that I shouldn’t be eating, and she said there wasn’t.”

But Deedee continues to wonder about the cause of her breast cancer. “Was it something I was exposed to? Because I grew up on a farm in the 60’s . . . tons of exposure to toxins helping my dad in the fields. Could that have contributed?” she wonders.

Her advice to others in this situation? “Even if you think you know what caused someone’s cancer, don’t say anything. We do not need to carry that burden, because we do not know. We just do not know.”

Besides these assumptions, Deedee was also plagued by well-intentioned people saying things like, “You look so good, I can’t believe you have cancer!” Such thoughtless comments when “they don’t see the neuropathy. They don’t see the scars from surgeries. They don’t notice the lymphodema. They don’t think about the fact that there are many types of breast cancer. They don’t realize that inside are so many emotions and feelings.”

In this situation, Deedee is very careful with what information she shares with people. “If I don’t really want to tell them anything, I will say back, ‘Well, I’m doing good,’ or ‘Breast cancer is a journey and I am taking it one day at a time.’ With my friends, I usually am a bit more open, giving them one piece of information at a time. You get to know who can handle the tough information and those are the people you share more with.” And if someone makes a comment about her still seeing her oncologist, she retorts, tongue-in-cheek, “Yes, we’re best friends for life now!”

On October 1st, Deedee finished with her last chemotherapy infusion. Two days later, on October 3rd, she and her husband took off in their camper, their dreams of traveling – delayed since May because of her breast cancer – now a reality. “I told my doctor, ‘I want to travel,’ when he told me I had breast cancer, and he responded, ‘You will, you will.’ We finally did!” she exclaims happily.

We are extremely grateful that Deedee chose to share her experience with Firefly Sisterhood. We know that the assumptions that her friends and family made when she shared her breast cancer diagnosis are just the tip of the iceberg for those of you reading this blog. Feel free to share your own experience in the comments section.

2 thoughts on “Assumptions Others Make: You Caused Your Cancer”