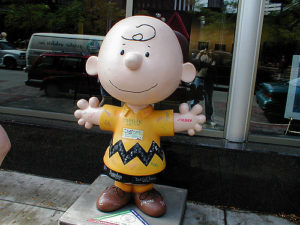 Are you familiar with Charlie Brown and his dog Snoopy? Minnesota cartoonist Charles Shulz created these characters in his 1950’s comic Peanuts. The comic was so popular that animated shows soon followed.

If you’ve seen any of the cartoon animations, you may be familiar with the unclear voice of adults – the wah wah – that was actually made by a trombone! If you’re not sure what we’re talking about or want to refresh your memory, click HERE to listen to the first instance viewers heard it – the voice of Charlie Brown’s teacher.

For Rae Ann, that is exactly what she heard from her doctor after he uttered the words, “You have lobular carcinoma,” over the phone.

This news was devastating as well as unbelievable: she had tested negative for her family’s hereditary mutation over nine years ago! “Because of this, in the back of my mind I thought I couldn’t get breast cancer,” Rae Ann admits.

During the first meeting with her surgeon, he laid out her options and said he would give her time to decide. She immediately told him, “I want a bilateral mastectomy and I will be here first thing tomorrow morning for it.” Rae Ann laughs as she recounts, “He told me he couldn’t do it the next day, to which I said, ‘Ok, lets do it the day after tomorrow, then.’ I wanted the cancer out immediately. Needless to say, my surgery was 3 weeks later.”

After this meeting, she met with her clinic’s Care Coordinator, who shared information with her about Firefly Sisterhood. She called Jenny, Firefly’s Program Manager, who connected her with Kristin*, a Firefly Guide. “Kristin was amazing,” Rae Ann begins. “She was a great resource and sounding board for all of my questions and she was there for me when all I wanted to do was curl up and die.”

Rae Ann’s said her oncologist “banned me from Google. She told me that I would drive myself insane with all of the bad and outdated information out there.” So she trusted her doctor—for the most part—and leaned on Kristin for support, especially during those times when she didn’t want to be treated like a cancer victim, which is often how she felt with friends and family.

Now, Rae Ann is scheduled to attend an Initial Guide Training to become a Firefly Guide. “I want to pay it forward,” she says. “I have been there, done that, and I am on the other side. Breast cancer is a scary thing, and I feel for people who don’t have support. I want to help, to give back.”

Today—this Tuesday—we honor the ordinary people who are going through cancer, its treatment, and the scary world that encompasses cancer survivorship—people like Rae Ann and the hundreds of women who reach out to Firefly every year for support.

They are the ones that put on a brave face while watching the infusion nurse stick a needle into a vein for chemotherapy. They courageously sign up for clinical trials and become the “guinea pig” for new cancer drugs that may or may not work. They willingly submit to undignified tests, procedures, and exams to prolong or save their lives. For this, they are each heroes in our eyes.

“A hero is an ordinary individual who finds the strength to persevere and endure in spite of overwhelming obstacles.” – Christopher Reeves

Written by Amy Tix, an 11+ year survivor of breast cancer who understands how much bravery and courage it takes to look a cancer diagnosis squarely in the eye.