Human relationships can be so difficult at times, can’t they?

Not so with our pets – our relationships with those members of our family are just plain different.

And different can be good. Very good, especially when going through an incredibly difficult time in life. Maybe even the toughest time you’ve ever experienced: a breast cancer diagnosis and treatment.

In this blog of our series, Our Pets, Our Selves, Firefly participants share how their dogs influenced their breast cancer experience, their healing, and their lives. Their stories will have you reaching for your dog or seeking out a friendly one to show your love and appreciation!

Sara has 2 daughters who were incredibly concerned about her being home alone: her youngest was heading off to college and Sarah had recently gone through a divorce. They decided that Sara needed a puppy. 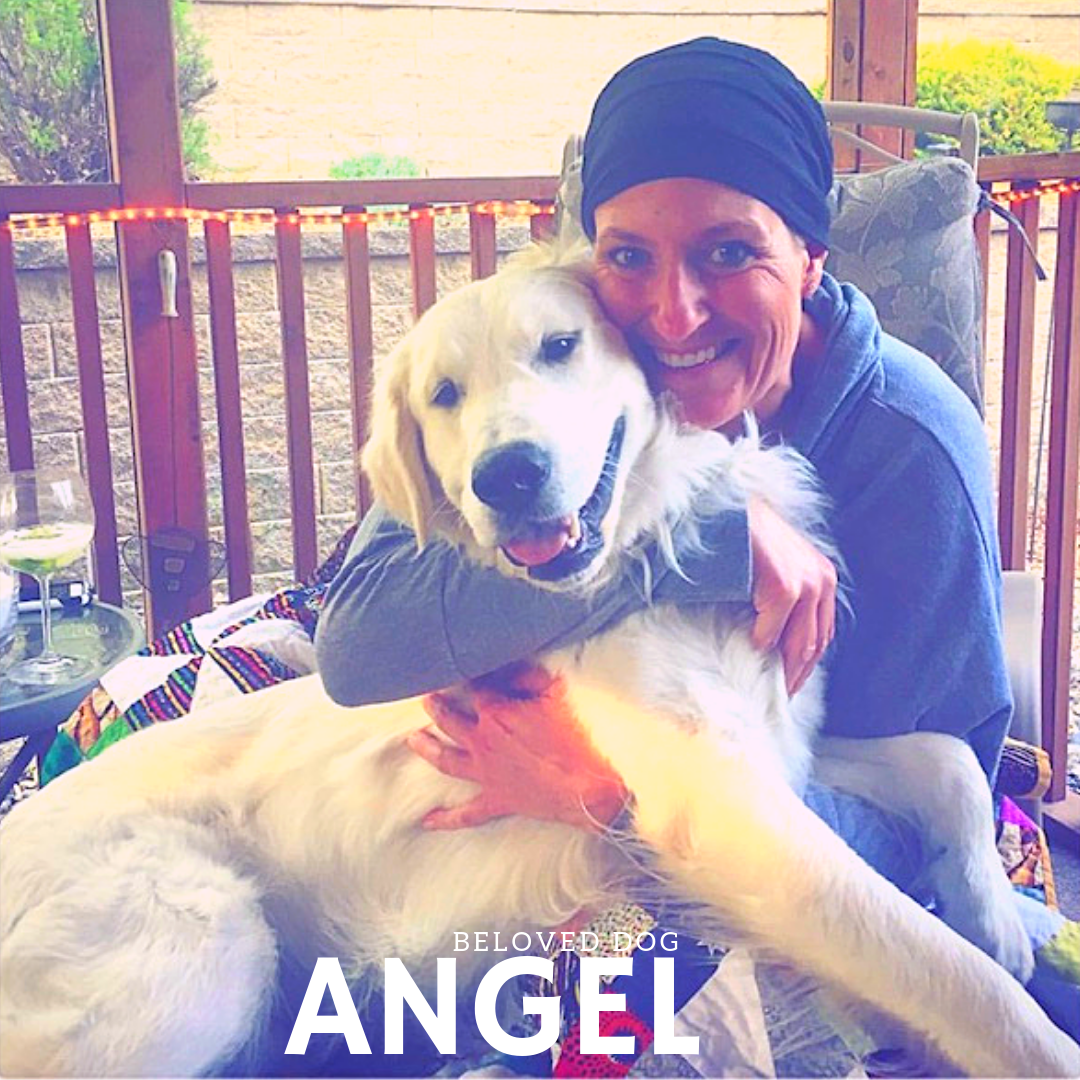 A few months after her daughters picked out an English Cream Golden Retriever puppy for her, Sara received a breast cancer diagnosis. Her first thought? “What am I going to do with this puppy through treatment? I am a single mom who works full time!” She admits, “The logistics of it really overwhelmed me at the time.”

She needn’t have worried. “He was a total puppy until I got sick,” Sara begins. At that point, he transformed into her “angel” (with his white fur, the name stuck). “I spend a lot of time on my screened-in porch – healing from surgeries and treatments – and he sits right next to me.” Sara shares. And that is where the two of them were during this interview: Sarah on her porch and Angel sitting on the floor next to her.

“What I thought would be a barrier and a boundary and a logistical headache because I was balancing work and so much treatment, was the opposite,” admits Sara. “He ended up being the biggest blessing of them all!” Because of this, “My dog has been elevated to human. Seriously. He’s a fur baby for sure,” Sarah says with love and affection in her voice.

For Debbie, their family welcomed a chocolate lab puppy (named Darwin) into their home for her two teenage sons, who loved taking care of him when he was little. But, as children do, they grow up and get busier, so Debbie became the main caretaker for Darwin. 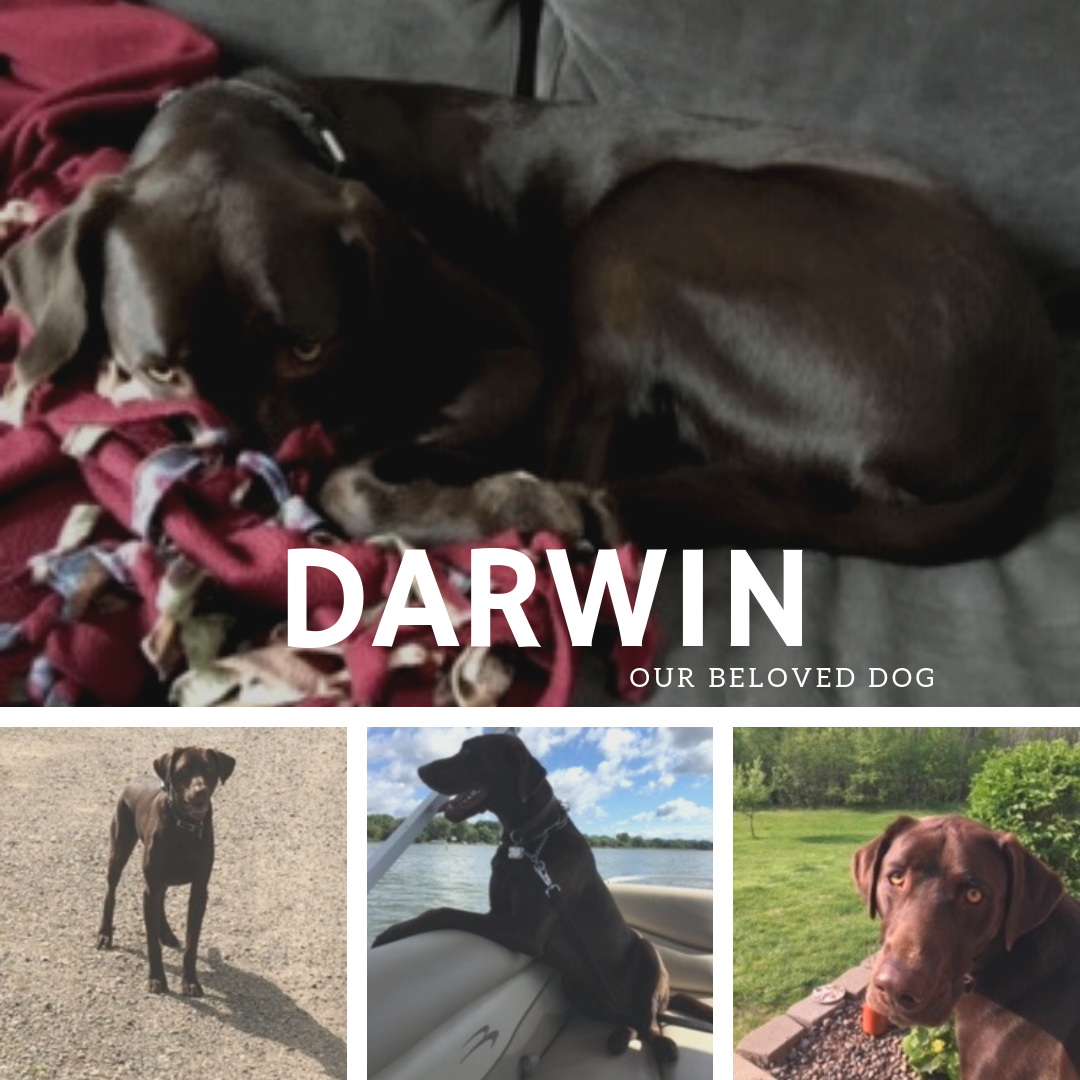 Then Debbie was diagnosed with metastatic breast cancer. “Darwin didn’t instinctively know I had cancer, but when I had chemo, he would come and lay down next to me and push his entire body weight on me and push his legs into me,” Debbie exclaims with a laugh. “He would push his way into every nook and cranny to be as close as he could get to me.”

“It was so lonely during chemo when there aren’t people around,” admits Debbie. “Having him there really helped me a lot. It was very comforting.” Her affection for Darwin is profound: “I have a deep sense of love for Darwin, probably in a shorter time than with my other dogs. I loved my other dogs, who were a huge part of my life, but I have a different connection – an unspoked connection – with Darwin. He knows when I need him without me even saying anything.”

Debbie’s hair is growing back and she is feeling better. And Darwin? His behavior has changed. “Now he still checks on me – he gets up and goes down to see my husband off to work in the morning, then he comes back upstairs and stays in bed with me until I get up. Once I am up, he will sit on the deck with me while I have my coffee and then after that he goes on his way. Before, he would have constantly been by me.”

As for Darwin’s impact on the rest of the family, Debbie has taken note. “I know my husband has grown more attached to him since I have a terminal diagnosis. He likes to know that Darwin is going to be there—probably longer than myself—so he tries to be close to Darwin.”

Debbie’s sons are also affectionate with Darwin. Debbie observes, “Darwin does bring comfort to all of us. He brings normalcy now.” For Debbie, “He gives me a reason to get up off the couch and walk out to the yard or the driveway with him when I am really feeling ill. He gives me a sense of purpose and some continuity in our daily lives that is really good.”

Diane had a 2-year-old miniature schnoodle (named Ella) at the time of her breast cancer diagnosis. “She was my constant companion in those days while I was at home resting and recovering after surgery, chemo, and radiation. She was right by me the whole time.” 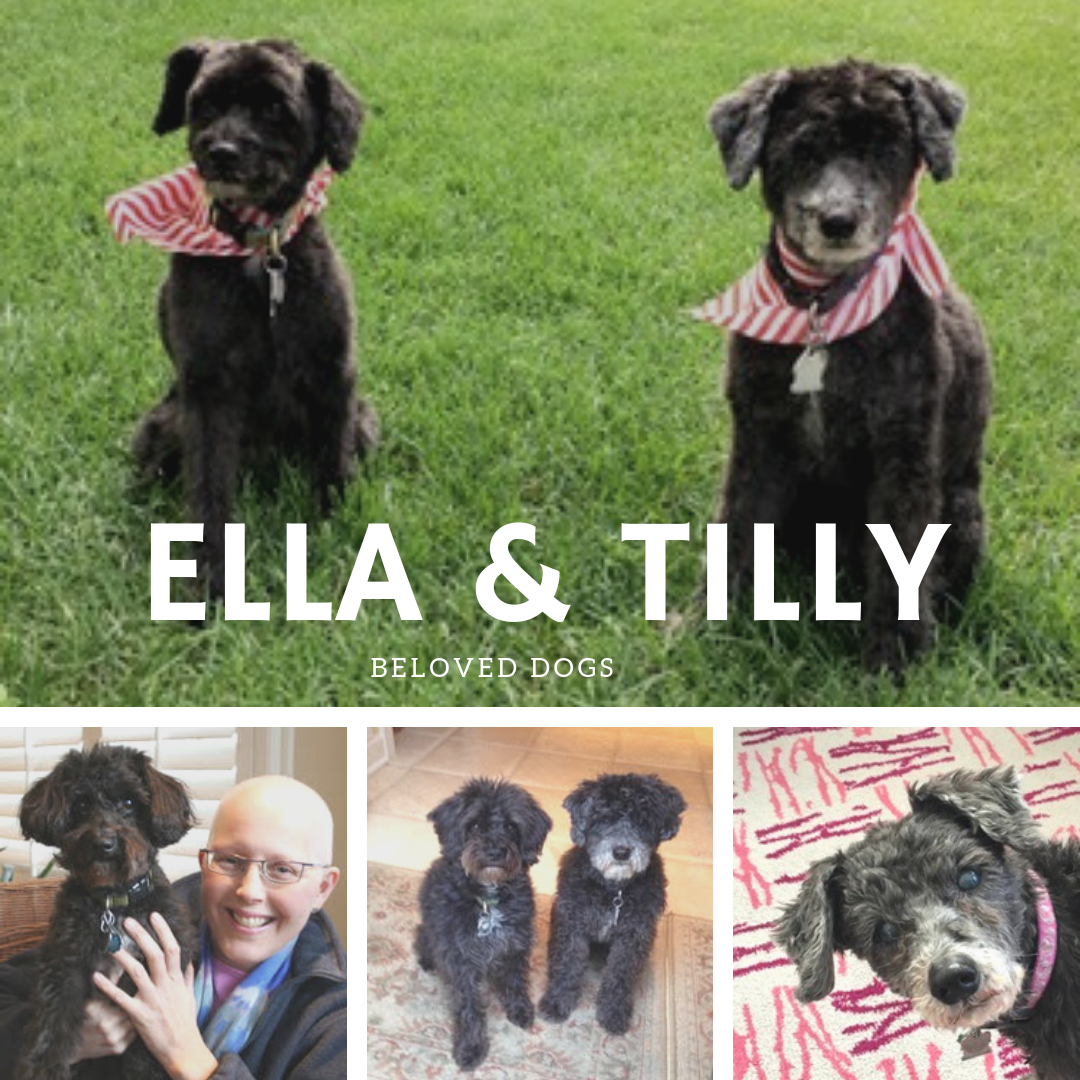 Beyond this emotional support, Ella was important to Diane’s physical health as well. “Ella was my motivation to get out of the house several times a day to walk,” admits Diane. “Even after surgery, when someone else would have to hold the leash for me.”

Three years later, Diane’s daughter was heading off to college and she considered adding a second dog to their family. “Could I handle another dog? Will I be around long enough?” were questions that Diane struggled with before adopting Tilly, Ella’s half-sister.

And Diane couldn’t be happier about the decision. “Ella and Tilly are so gentle and loving to our grandkids, and at 15 and 10 years old, they still get me out walking every day in all Minnesota weather.”

Diane is part of the Comfort Club, a group that meets in Edina for spiritual support through cancer. When the Comfort Club meets at her house, “Ella and Tilly are happy to offer their own brand of comfort as they snuggle up next to the one who needs their love the most that particular day.”

The late Gilda Radner said, “I think dogs are the most amazing creatures; they give unconditional love. For me they are the role model for being alive.” After reading these stories, I think we can agree that each of these women feels that way about their dog(s).

A huge thank you to Sara, Debbie, and Diane for sharing Angel, Darwin, Ella and Tilly with us, and a huge thank you to the dogs, cats, and other pets that bring us joy and enrich our lives. We are better people because of them!

Written by Amy Tix, breast cancer survivor and Firefly staffer who grew up on a farm that had dogs, cats, and other animals. “I have many fond memories spent in the haybarn searching out and trying to tame the kittens each spring. And I remember our loyal dogs that would wander behind us as we walked through the beanfields pulling weeds: however, I think they were allowed to leave the field before the work was done!”