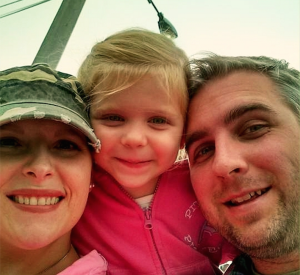 Kim, Dustin and their three-year-old daughter Reagan know something about living life to the fullest. They may not have chosen the path that brought them this wisdom, but they recognize that it’s allowed them to achieve a perspective many people never do.

“We get so frustrated when we see people we care about living with blinders on, working themselves to the bone and spending weekends resting just to go back to work, getting stressed out about insignificant things,” says Kim. Dustin chimes in, “There are so many things that, before, I’d filled my life with, that aren’t important… Now, life is so much simpler, because I don’t need to waste my time pursuing things that in the end aren’t going to give me much pleasure or happiness. But knowing that our time together is limited—all I want to do is enjoy it. Life is awesome.”

That is what it means for their family to live with Kim’s stage 4 breast cancer diagnosis.

Reagan was eight months old when Kim was diagnosed in July of 2012. The lumps in her breasts had been chalked up to breastfeeding, but when she started experiencing pain in her sternum, her doctor sent her to get a mammogram, “just to have a baseline,” she said. A week later, an oncologist was reporting that the breast cancer the mammogram detected had already progressed to advanced stage: it was in her sternum, lungs, liver and spine.

“I’m a pharmacist, so I knew the ins and outs of the drugs that treat cancer, and I knew what the statistics are when you’re diagnosed with stage 4. It sucks. I was scared to death, sobbing,” says Kim. Plus, Dustin had quit work to go back to school and be a stay-at-home father when Reagan was born, so “I had the burden of being the breadwinner and carrying the insurance.”

All of these things swirled through Kim’s mind when she received the news at work that day. But something shifted on her walk home, and her terror and panic gave way to a kind of peace. She remembers, “I became really calm. I took deep breaths. I felt the sun. I just lived in every second. I’d never really done that before. I thought, ‘I feel okay…this is going to be okay.’”

Some might call it living in the moment; others might call it being forced to slow down. It’s something that many people with a serious illness experience, and it’s often a source of frustration. But Kim and Dustin have looked at it as a gift. Kim says, “We were in this routine that so many people get into. You get the job to get the money to get the house, then you’ve got the bills, and the baby, and it’s all just about planning for when you’re 70. Suddenly, it’s years later and life’s just happened.” But with the uncertainty of Kim’s health, they quickly jumped off that track.

Through smart planning and what they now see as almost unbelievable good fortune, Kim had taken out a disability insurance policy many years earlier; so when she stopped working a year after her diagnosis, the family was able to maintain their lifestyle. And though Kim had never even been sure she wanted children and had always imagined her career would be the primary force in her life, she says, “Now through the strangest, weirdest blessing, I get to be a stay-at-home mom, which is the most amazing, rewarding, wonderful job I could have ever wanted in my life. And I never would have had that before.”

She goes on, “You can take something like this, and look at it for the statistics, or you can take it and say, maybe I’ve been given a second chance. There are ups and downs, but I’ve been relatively healthy, and we’ve been able to spend the last two years at home raising our daughter together. What kind of crazy blessing is that? So that’s how I chose to look at this. I’m not naïve about the science, but I choose to live, and I think that makes all the difference.”

“It’s not all sunshine,” Dustin notes. “We’re still human. But when I get to those darker moments or when I’m feeling more stressed or when we’re bickering over silly things, I’m able to sit back and remind myself about what matters.” Right now that means spending quiet summer afternoons together in the backyard, gardening and watching Reagan play blissfully on her new swing set.

It also means thinking about their legacy, and about what they want to do with the time they have to give. Sharing what cancer has taught them about valuing every day is part of that, as is supporting other survivors and caregivers. Kim now lends her insight and experience to the Firefly Sisterhood as a Guide.

Kim says that when she first heard about the Firefly Sisterhood, she though about “how fabulous it would have been to have someone in the beginning for whatever weird question I had, or to cry with, or to laugh about the things that would be awkward to bring up with most people.” During the first year after her diagnosis, Kim didn’t meet any survivors she identified with, and she knows now how valuable that is: “Stage 4 is a special club. You don’t want to see the numbers. But seeing a person in front of you who is living with it, dealing with it like it is a chronic issue they’re pushing through, that is totally different. When I finally started meeting people with stage 4, people my age who had been living five years, six years—it was a boost.”

Kim says that she also sees how Firefly can relieve the stress on a survivor’s relationships, particularly with a spouse or other primary caregiver. Survivors need “another place to put their fear and pain,” she notes. Dustin has been “her rock,” she says, “but he can’t be that all the time.”

Dustin says, “The tip you always get is to recognize the new normal. And then you’re supposed to accept the new normal. But it’s impossible to accept the new normal 100 percent of the time. You’re going to miss what it was like before, you’re going to be sad and angry.” Although he’d received information about support groups when Kim was initially diagnosed, it took him years to feel ready to open up. “For me personally, the caregiving experience is private and intimate,” he notes. “I imagine [a lot of] guys don’t even feel comfortable talking to their spouses about their stresses. I mean, she has stage 4 cancer, what are my problems compared to hers? I don’t want to burden her with my stress.” When he finally did feel ready to reach out for help, he had a difficult time finding resources that were a good fit.

Dustin’s experience taught him firsthand not only what caregivers need, but also how lacking the existing support system for caregivers is. Like Kim, he’s using his insight and experience to give back by trying to bridge some of the gaps. In 2014, Dustin and two fellow caregivers founded a nonprofit organization called Jack’s Caregiver Coalition.

Jack’s Caregiver Coalition aims to provide social support, project-based support and a network of resources as a way to connect caregivers with each other and to help them develop a support system that fits their needs. Dustin notes how important it is to provide different options for what that support can look like, be it someone to fix a broken dishwasher, provide tools for navigating finances, or simply grab a cup of coffee or a beer: “Guys often aren’t as easily engaged…but everyone [at Jack’s] knows that if they want to talk, everyone is on the same page. So you don’t have to have that weird awkward moment where you say ‘cancer’ and no one knows what to say. We’re trying to create that safe space.”

That Kim and Dustin have the fortitude to do so much for others while navigating their own path—a complicated, treacherous one, but one in which they unfailingly focus on the beauty around them—is nothing short of remarkable. We’re deeply inspired by their story and their work, and by the light they shine for so many.