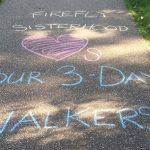 “It’s a community of people who are crazy enough to walk it,” says Marti, one of Firefly’s Guides who will participate in the Susan G. Komen Twin Cities 3-Day Walk for the third year in a row. With this year’s event occurring August 18-20, 2017, Marti will walk 60 miles in an effort “to take the challenge of cancer and put it to good use.”

The Susan G. Komen Breast Cancer Foundation was established in 1982 with the first 3-Day walk occurring 14 years ago. The vision of Susan G. Komen is a world without breast cancer, while the more immediate goal is to reduce the current number of breast cancer deaths by 50% in the U.S. by 2026. All participants in the 3-Day raise $2,300, with the majority of net funds going toward Komen’s national priorities and the remainder staying in the local community.

Following her own breast cancer diagnosis in 2014, Marti chose to walk the 3-Day just two months after finishing chemotherapy. She’d heard about the walk and was determined to make something positive out of something negative. “It’s so totally worth it, especially when maybe you didn’t think you could do it!” Coincidentally, it was during this first walk that Marti met Jenny Cook, Firefly’s Program Manager, and in 2016, Marti became a Firefly Guide.

Marti also happened to meet another Firefly Guide, Debbie, on one of her walks, when both of them participated in the event’s survivor celebration. Debbie was asked by a friend 13 years ago to join the friend’s team of walkers. She was happy to be part of the effort, unaware that she would be diagnosed with her own breast cancer just two months later. Still undergoing treatment the following August, Debbie committed to walking again and has not stopped since. Now a two-time breast cancer survivor, Debbie will be participating in her 13th walk this year.

Asked why she commits herself to the rigor of training and walking 60 miles each year, Debbie answers, “I can do it. I’m walking for those who can’t, and I’m going to walk until they find a cure.” Both Marti and Debbie talk about the inspiration they gain from others on the walk and the importance of the community of people involved. “You’re strangers to begin,” Debbie says, “but by the end of the walk, you’re family.” Best of luck (and wishes for comfortable shoes!) to Marti, Debbie, and all of the 3-Day walkers!