Perhaps you already know that 13% of all women will develop breast cancer sometime over the course of their lives. You may even count yourself as one of those who make up that 13%.

Of those breast cancer cases, only 5-10% are hereditary (they are passed down through families, typically from an inherited gene mutation in DNA). 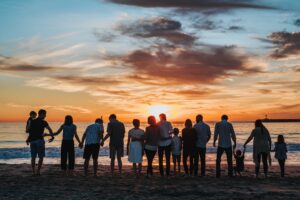 For some families, it’s clear that breast cancer “runs in the family” because so many develop the disease. For Charlotte*, that wasn’t the case, “My dad had no sisters, he is the only child, and I am the only girl in my family. We didn’t think of ourselves as a ‘cancer family’ as we didn’t have enough people to see cases showing up.”

However, shortly after Charlotte’s breast cancer diagnosis at age 51, in a meeting with her surgeon, several questions about family history led the surgeon to recommend genetic counseling and genetic testing. She had told her surgeon that “My grandma died of breast cancer when she was in her early 40’s. Her sister died of it around the same time, also in her 40’s.” Charlotte’s age at diagnosis, like the young ages of these female relatives, was a red flag for her surgeon.

Charlotte brought her parents with her to that first meeting with the genetic counselor – she felt they knew the family’s medical history far better than she did. But she wasn’t prepared for the devastation of receiving a positive test result for a BRCA1 (BReast CAncer 1) genetic mutation. It was overwhelming for Charlotte. “Now it’s not just a concern about breast cancer, it’s a concern about preventing ovarian cancer, and the rise in other types of cancer that are related to this genetic mutation. It’s a lot of information to take in.”

For Charlotte, her genetic counselor was a lifesaver. “She was the most important person in that first month of treatment information, as she had the time to listen and explain everything.” 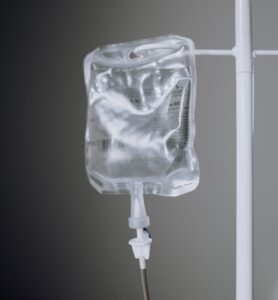 Being positive for a BRCA1 mutation changed the course of Charlotte’s treatment for her breast cancer significantly. “I chose a double mastectomy instead of a lumpectomy; I did chemotherapy; and I had a complete hysterectomy because of the concern about ovarian cancer.”

Despite feeling overwhelmed, Charlotte felt a sense of relief at finding out about her BRCA1 genetic mutation. “It kind of put a reason, if you will, for why I got breast cancer – I was a 51 year-old healthy athlete, and you don’t think of yourself as someone who was going to get cancer – and so it helped make a bit more sense of that. When I look back now, that information potentially saved my life, or will: because of the extra treatments and continued visits to the oncologists for screenings, I am hopefully going to have a very long life.”

But saving her own life was one thing. After getting her genetic results, Charlotte also decided to tell her broader family – hoping that they would see this as a way to save their own lives, too. It didn’t go as she predicted. “The people who had the least amount of cancer in their family were the most interested and vice versa. For example, a relative who was 32 and had breast cancer wanted nothing to do with this information!”

Charlotte was also surprised when her brothers chose to wait to get tested, even though a BRCA1 mutation increases their risk for breast and other cancers. “Both have waited for their daughters to ask, and that’s understandable, because that’s not information that your children may want or are ready for. I have guilt about the anxiety that this has caused my nieces.” Thankfully, one of her brothers tested negative, which was a huge relief for his children. The other plans to go through testing soon.

For Charlotte, the hardest part of carrying this BRCA1 mutation is “the concern that there’s a higher risk for cancers that you can’t screen for, like pancreatic cancer and ovarian cancer. It’s the concern about things you are powerless to control.” Charlotte follows screening recommendations for BRCA1 mutation carriers from her genetic counselor. Beyond that, “There’s nothing more I can do about it. I try to stay healthy in terms of being active, I am the correct body weight, I don’t drink a lot, and I eat a healthy diet.”

Eight years post breast cancer and BRCA1 diagnosis, Charlotte offers some advice for someone newly diagnosed with a BRCA mutation. “Information is power: the more you know, the more you are able to take care of yourself and feel like you have some element of control over this.” In her own research, Charlotte came across FORCE (Facing Hereditary Cancer Empowered), a nonprofit devoted to providing the latest information and support to anyone with inherited cancers. 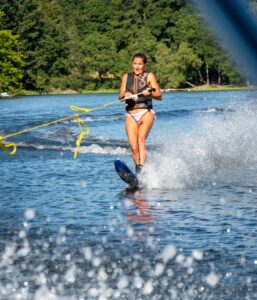 “It was really hard to find anyone who could relate. And then I met a woman through FORCE, and she was like, ‘Yeah, I was waterskiing 4 weeks after my mastectomy.’ And I was like, ‘NOW, I have found my people!’ It was so reassuring, as an athlete, to know that I could fully regain those parts of my life again. It was important to see and hear that.”

At Firefly, we couldn’t agree more. Join us for future blogs in this series that delve into the science of genetic mutations for breast cancer (an interview with Anna Leininger, Certified Genetic Couselor) and personal stories (pre-vivors, and other genetic mutations).

We couldn’t be more thankful for the amazing women who are brave enough to share their stories with us. A huge should out to Charlotte for starting this blog series with her own story of how her BRCA1 genetic mutation has changed her life. Until next time . . . .

Written by Amy Tix, Firefly Staffer, Long-Term Breast Cancer Survivor, and BRCA2 Carrier. “I, too, feel incredible guilt at the thought of passing this mutation on to my children. Unfortunately, they have the same chances of getting my genetic greats (blue eyes, high metabolism, etc.) as my genetic flaws (wide feet, BRCA2+, etc.).